On June 3rd, Vault Field Vineyards hosted an event put on by Westmoreland County Museum in tribute to its members.  The event was organized by Museum Educational Program Director, Alice French, and was complete with live piano performance by Beth Parker.  Around 30 members attended and enjoyed tastings of Vault Field’s wines, as well as a tour of the vineyard and winery.

The property was purchased in 2004 by Keith and Joanne Meenan who now operate the vineyard and winery with the help of their son, Dan.  The family planted their first 4,000 vines in 2005, their second 4,000 in 2006, and celebrated their first vintage at the end of 2006.  The processing of the grapes and wine, as well as the bottling, is done entirely on site.  Between the three of them and the help of a few seasonal workers, they produce between 1,600 and 1,700 cases…

Looking for that perfect park or campground to visit that’s well maintained, offers a variety of fun, outdoor activities, and has spectacular scenic views?  Consider your search over upon discovering Westmoreland State Park, selected as one of America’s Top 50 scenic views.  Opened in 1936, the park was built by the Civilian Conservation Corps (CCC), a New Deal program dedicated to conservation care.  The park is located just minutes away from the birthplaces of both George Washington and Robert E. Lee.

Perfectly positioned on the Potomac River, Westmoreland State Park is known for its water attractions.  In fact, in 2008 it was selected as one of America’s Top 25 canoeing spots.  The staff leads kayak and paddle boat trips, as well as rent them out individually, down to Fossil Beach, where visitors can sift for and find sharks’ teeth, whale bones, and pre-historic fossils. There is also a power boat…

George Washington’s Birthplace, part of the National Park Service, offers an entertaining and educational adventure in one of Virginia’s most beautiful and historical settings.  The park is located along Pope’s Creek, which neighbors the Potomac River, and the water can be seen glistening through the cedars from almost any point in the park.  A memorial obelisk marks the park’s entrance leading to the historical grounds, picnic area, and visitor center. The park’s main attraction, the historical area, was created in 1932 as part of the bicentennial celebration of George Washington’s birth.  The historical plantation buildings can all be viewed by walking along a crushed oyster shell path that loops through the grounds, although you might have to share the path with the numerous butterflies weaving in and out.  Along the loop you’ll first pass the tobacco garden, right outside of the animal barn where sheep can be seen grazing in…

There is much evidence at Menokin of human impact on the land. The example below demonstrates that there were tobacco rolling roads on the Menokin plantation. These roads allowed for barrels filled with tobacco to be easily transported to the river. After these barrels were rolled down these roads to Cat Point Creek, they were shipped off to be sold in various markets.

These tobacco rolling roads were built to hasten the process of transporting tobacco and further the success of the plantation.  The enslaved men and women at Menokin most likely dug these roads, evidence of which you now see today.

The landscape holds traces of history everywhere. These rolling roads demonstrate that the actions of people centuries ago are still with us today. Even though the forest looks wild, upon closer look you can see the imprint of Frank’s decisions and the labor of slaves.

These tobacco rolling roads helped advance the commercial interests of Menokin. Can you see how people use land today to enhance one’s business? What other ways do people impact and distort the land?

Are you sad the cherry blossoms are no longer in bloom? Do you still need that tree fix?! At Menokin, there are an abundance of tree species to see. In fact, you can download our tree guide and learn about over 30 species of trees while enjoying a nice walk on our nature trail. Bring some friends and your dog and experience these natural wonders!

First, let’s test your tree knowledge! Do you know what tree this is? (Hint: it is the Virginia state tree)

Can you name this tree?

It’s a Tulip Poplar (Liriodendron Tulipfera)! The tulip poplar is one of the largest of the native trees to the Eastern seaboard. Native Americans and colonists used these trees to make canoes.  It could be that the Rappahannocks, who lived on Cat Point Creek, could have used some of Menokin’s tulip poplars to build some canoes! [2]

Another tree you can see at Menokin is a Devil’s Walkingstick. Can you tell us how this tree got such a spooky name?!

In 2009, archaeologists found a beautiful locket in the Menokin house ruin.  This cameo locket portrays the image of a woman.  Who did this locket belong to? Who is this woman?  A 1794 letter from Frank’s brother, William, may just be the key to unlocking this mystery!

In 1785, two years after the death of his wife, Hannah, William Lee sent his two daughters, Portia and Cornelia, to live at Menokin with Uncle Frank and Aunt Becky.  Hannah Lee thought it important that her daughters grow up in Virginia. William wrote to family friends in London, Mr. and Mrs. Samuel Thorp, to further explain the desire for his daughters to grow up in Virginia. He writes, “[H]owever superior English education may be to what can be obtained here[,] yet the manners & customs of the ladies in England are so extremely different from the ladies here [in Virginia] that I never knew an instance of a young lady educated in England who could live happily here.”

He also wrote to the Thorpes requesting a momento by which Portia and Cornelia could remember them.  He writes, “Our dear girls at Menokin are so importunate to have a miniature picture for each of them of your self & good Mrs. Thorp…have them set in gold to wear as bracelets…or a locket…the form should be rather a long than a round oval not too sharp at the ends…”

Could this be Mrs. Thorp on the locket?  Did it once adorn the neck or wrist of young Portia or Cornelia Lee?

We hope to answer these questions with further research. In the meantime, tell us what you think and check back at Menokin Monitor for updates on this locket and other objects at Menokin.

We’d like to thank the Virginia Chapter of the Colonial Dames whose generous grant helped stabilize the locket.  The locket is on display in Menokin’s Visitor’s Center.

The Northern Neck region is teeming with important founding fathers.  George Mason, whose Declaration of Rights laid the groundwork for the current Bill of Rights to the Constitution, is another patriot who well represented Virginia and furthered freedoms for Americans.  In fact, George Mason put Frank on the road to the Continental Congress and subsequent signature on the Declaration of Independence.

Frank was not originally chosen to represent Virginia in the First Continental Congress.  During the dramatic summer of 1775, Frank did serve on the Virginia Convention.  However, during this summer Virginia delegate Richard Bland became ill and sought a replacement.  The first choice was George Mason.

Mason, however, routinely avoided public office.  Politically clever Mason, though, saw his refusal as an opportunity to nominate a high quality candidate and a fellow Northern Neck man to boot.  Frank was Mason’s top choice. He wrote, “I took the occasion at the same time to recommend Colo. Francis Lee.”  The other Virignia delegates agreed with Mason’s nomination and elected Lee to the Convention with an easy majority. Frank Lee, upon hearing of his election, made quick preparations and him and Rebecca packed up and moved to Philadelphia, not to return to Menokin until 1778. [1]

George Mason authored the first draft of the Virginia Declaration of Rights. His Declaration was the first document in America to call for freedom of the press, religious tolerance, restricting unreasonable searches, and the right to a fair trial.  He was a member of the Constitutional Convention, but ultimately refused to sign the new Constitution due to his disagreement over the power of the federal government and the continuation of the slave trade. [2]

So next time you’re in the Northern Neck region, stop by Gunston Hall and pay your respects to George Mason and thank him for nominating Frank to the Convention and for believing in his political acumen and patriotic fervor.

Gunston Hall is open every day (except Thanksgiving, Christmas, and New Year’s) from 9:30 am – 5:00 pm.  For more information, visit their website.

We have chosen the architecture firm of Machado and Silvetti Associates, LLC to lead an interdisciplinary team in the planning and design of the Menokin Project. We are certain that Machado and Silvetti will implement our vision to present Menokin through its many parts and pieces rather than through a traditional reconstruction. Further, this renowned firm will help our Foundation realize its goal to become an internationally recognized learning center for heritage and natural resource conservation through innovative practices and technology.

Our glass house project is an innovative and groundbreaking approach to historical preservation.  We will not restore the house to how it looked in the late 1700s, but instead recreate the missing parts of the house by using glass. 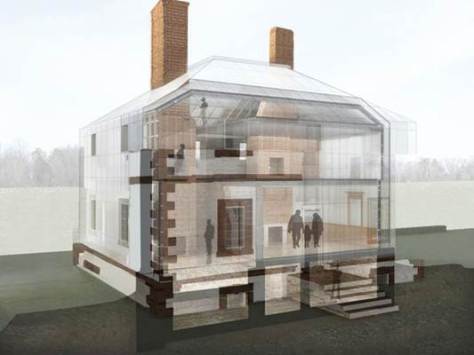 After the loose pieces of the house were removed and categorized,  we  were faced with the challenge of stabilizing and preserving the house, while at the same time furthering the public’s understanding of how the house was built and the historic make-up of the house. We wanted the ruins to be a safe place where people could learn and discover. The glass concept allows visitors to see the inner workings of the architectural structure  of the house, while also allowing visitors to envision what the house looked like at its prime.  Menokin, through this project, fulfills its aim to interpret Francis Lightfoot Lee’s life as well as further current knowledge of architecture, archaeology, and preservation.

Machado and Silvetti, headquartered in Boston, is best known for its contemporary designs that are attached to historic settings. The firm is one of the few practices in the United States that specializes in merging innovative and contemporary agendas with historic structures and contexts. A recent project includes designing a research and exhibition center within a historic landmark fort in Abu Dhabi, UAE. 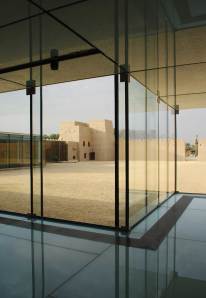 We are confident Machado and Silvetti will further our aims to be an innovative and internationally renowned education center. Construction on the glass house is projected to begin in 2015. We will continue to post updates on the glass house project at Menokin. We welcome any comments or questions!