There is much evidence at Menokin of human impact on the land. The example below demonstrates that there were tobacco rolling roads on the Menokin plantation. These roads allowed for barrels filled with tobacco to be easily transported to the river. After these barrels were rolled down these roads to Cat Point Creek, they were shipped off to be sold in various markets. 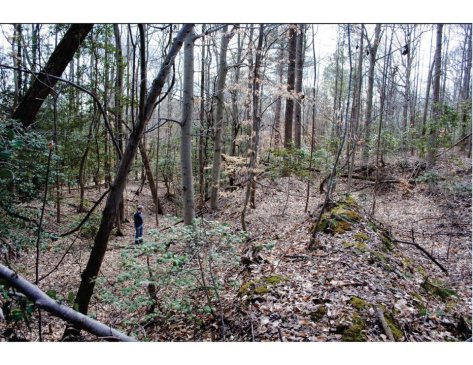 These tobacco rolling roads were built to hasten the process of transporting tobacco and further the success of the plantation.  The enslaved men and women at Menokin most likely dug these roads, evidence of which you now see today.

The landscape holds traces of history everywhere. These rolling roads demonstrate that the actions of people centuries ago are still with us today. Even though the forest looks wild, upon closer look you can see the imprint of Frank’s decisions and the labor of slaves.

These tobacco rolling roads helped advance the commercial interests of Menokin. Can you see how people use land today to enhance one’s business? What other ways do people impact and distort the land?