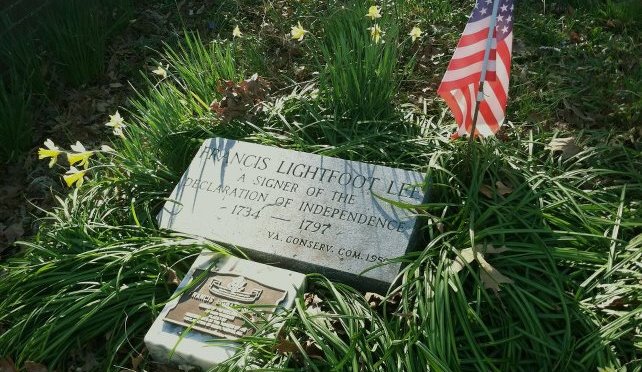 Even in Virginia’s Northern Neck, Burnt House Field Cemetery is an out-of-the-way place to honor a signer of the Declaration of Independence. The cemetery at Hague in Westmoreland County is surrounded by a brick wall and 100 acres of corn. Richard Henry Lee (1732-1794) is buried here with his parents and grandparents.

Lee was more than just a signer. In the Continental Congress in Philadelphia, Lee introduced the resolution calling for independence from Great Britain that led to the Declaration of Independence on July 4, 1776.

His brother Francis Lightfoot Lee (1734-1797) also signed it. Ten years earlier, they had burned an effigy of the Tax Man at the Westmoreland courthouse and helped organize other opposition to the hated Stamp Act.

Sponsored by the Northern Neck of Virginia Historical Society and Cople Parish, the commemoration at the Lee cemetery will begin at 8:30 a.m. It will feature a living-history interpretation of Francis Lightfoot Lee and his wife, Rebecca Tayloe Lee, visiting Richard Henry Lee’s grave. (Francis Lightfoot Lee is buried in the Tayloe Cemetery at Mt. Airy near Warsaw.)

The observance will then move 5 miles to Yeocomico Episcopal Church. Built in 1706, it was the home church of the Lee family. Richard Henry Lee and his father Thomas Lee both served on the vestry. The service at the church will include prayers and the singing of patriotic hymns and the national anthem.