This premiere lecture centers on reconstructions, i.e. lost works of architecture that have been completely rebuilt such as the Governor’s Palace in Williamsburg. The structures are not limited to the United States but include examples in Germany, Russia, Italy, England, China, etc.  Menokin’s Glass Project  will be featured as a special case.

In a career spanning four decades, Calder Loth, as senior architectural historian at the Virginia Department of Historic Resources, shaped the direction of historic preservation programs from survey and National Register listings to rehabilitation tax credits, review and compliance, and preservation easements. Calder is a long-standing member of the Virginia Art and Architecture Review Board. His expertise has shaped the preservation and renovation of many buildings including the Virginia State Capital and the historic executive mansion. He continues to give back to the preservation community as a staunch advocate and widely published author for “architectural literacy” giving lectures to museums, universities, and professional societies worldwide.  In 2008, Calder received the first annual “Secretary of the Interior Historic Preservation Award” given by Secretary of the Interior Dirk Kempthorne.  He has been an Honorary Trustee of the Menokin Foundation since its inception in 1994.

PREVIOUS LECTURES IN THE 2016 SERIES

In eastern Virginia stone houses are rare. Important colonial buildings in the Tidewater region are primarily constructed of brick. This makes sense, as the Atlantic Coastal Plain is rich with sand and clay, the main ingredients in bricks, and rocks are rare on the Coastal Plain. Professor and Chair of the Geology Department at the College of William and Mary, Chuck Bailey, will discuss the unique geological phenomena that allowed for sandstone to be present on the property, an uncommon material in Tidewater Virginia. This natural occurrence allowed for the Menokin House to be built from iron infused sandstone.

I’m a structural geologist whose research focuses on the geometry and tectonic history of deformed rocks as well as the physical and chemical processes that control rock deformation.  I am particularly interested in ductile fault zones (high-strain zones) and work to understand both the deformation path experienced by mylonitic rocks as well as elucidate the tectonic history recorded by these important crustal structures.

With William & Mary undergraduates I’ve studied deformed rocks in the Appalachian Mountains, the low deserts of southern Arizona, the high plateaus of Utah, the Coast Mountains of British Columbia, and most recently in Oman examining its vast and well-exposed ophiolite.  Although the Appalachians Mountains have been studied for over two centuries, many key aspects of their history remain unanswered. Our studies in the Blue Ridge and Piedmont provinces are wide-ranging and integrate structural analysis with petrology, sedimentology, geochronology, and geologic mapping.  In Utah our research focuses on understanding the interplay between volcanism, tectonics, and surface processes in the transition region between the Colorado Plateau and the Basin & Range.

Over the past 18 years I’ve advised more than 100 undergraduate thesis projects at William & Mary.

Henry Brown escaped from slavery by shipping himself in a box from Richmond to Philadelphia. This bold feat was only the first act of a remarkable career. “Resurrected” from the box as Henry Box Brown, he appeared at antislavery meetings as a singer and speaker. In 1850, Brown produced a moving panorama, a kind of giant painted scroll presented in a theater, called Mirror of Slavery and toured it around New England and then across the Atlantic. Trace this remarkable journey with Jeffrey Ruggles, former Curator of Prints and Photographs, Virginia Historical Society, and author of The Unboxing of Henry Brown, Library of Virginia, 2003.

Jeffrey Ruggles is an historian and photographer with interests in the history of American culture, Virginia, and visual art. His book The Unboxing of Henry Brown (Library of Va., 2003) is a biography of the fugitive slave and performer Henry Box Brown. From 2002–10 Mr. Ruggles worked at Virginia Historical Society where he served as Curator of Prints and Photographs. His Photography in Virginia (2008) is a companion book to a 2008–09 exhibition at VHS. Other VHS exhibitions were Early Images of Virginia Indians (2003) and Organized Labor in Virginia (2010), and a long-term installation at Battle Abbey, The Virginia Manufactory of Arms (2005-15). Mr. Ruggles has degrees from the University of Virginia and Virginia Commonwealth University, and is an administrator at the Virginia Center on Aging at VCU in Richmond. 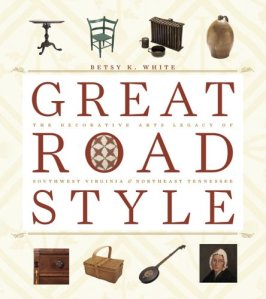 For the past 15 years, Betsy White and her team of scholars have been delving into the decorative arts traditions of southwest Virginia and northeast Tennessee, parts of two states linked geographically, culturally, and historically. Settled during the last years of the 18th and first years of the 19th centuries, it became America’s first frontier, connecting the eastern seaboard with Kentucky, Tennessee, and beyond. Its settlers came down the Valley of Virginia on the Great Philadelphia Wagon Road or simply the Great Road, as it was known locally. Artisans followed settlers, bringing with them the material culture of their homelands. What sprang up was a lively blend of cultural traditions that formed a distinctive style of furniture, ceramics, textiles, metalwork, and music. Join Betsy White as she leads us through the friendly country forms of pie safes and quilts, overshot coverlets woven from wool and flax grown on the homeplace, elegant high-style furniture made by Philadelphia-trained cabinetmakers, and pottery decorated with splotches, daubs, and streaks. White’s field work has resulted in more than 2,000 records. Taken together, they create a Great Road style, one that is beginning to take its place in American decorative arts.

Betsy White, an art historian and a member of the Virginia Cultural Heritage Commission, graduated from Salem College in Winston-Salem, NC. 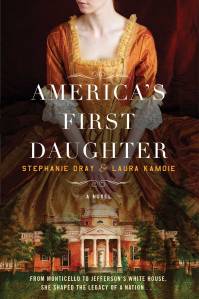 In a compelling, richly researched novel that draws from thousands of letters and original sources, bestselling authors Stephanie Dray and Laura Kamoie tell the fascinating, untold story of Thomas Jefferson’s eldest daughter, Martha “Patsy” Jefferson Randolph—a woman who kept the secrets of our most enigmatic founding father and shaped an American legacy.

From her earliest days, Patsy Jefferson knows that though her father loves his family dearly, his devotion to his country runs deeper still. As Thomas Jefferson’s oldest daughter, she becomes his helpmate, protector, and constant companion in the wake of her mother’s death, traveling with him when he becomes American minister to France.

It is in Paris, at the glittering court and among the first tumultuous days of revolution, that fifteen-year-old Patsy learns about her father’s troubling liaison with Sally Hemings, a slave girl her own age. Meanwhile, Patsy has fallen in love—with her father’s protégé William Short, a staunch abolitionist and ambitious diplomat. Torn between love, principles, and the bonds of family, Patsy questions whether she can choose a life as William’s wife and still be a devoted daughter.

Her choice will follow her in the years to come, to Virginia farmland, Monticello, and even the White House. And as scandal, tragedy, and poverty threaten her family, Patsy must decide how much she will sacrifice to protect her father’s reputation, in the process defining not just his political legacy, but that of the nation he founded.

Laura Kamoie has always been fascinated by the people, stories, and physical presence of the past, which led her to a lifetime of historical and archaeological study and training. She holds a doctoral degree in early American history from The College of William and Mary, published two non-fiction books on early America, and most recently held the position of Associate Professor of History at the U.S. Naval Academy before transitioning to a full-time career writing genre fiction. Her debut historical novel, America’s First Daughter, co-authored with Stephanie Dray, allowed her the exciting opportunity to combine her love of history with her passion for storytelling. Laura lives among the colonial charm of Annapolis, Maryland with her husband and two daughters.

Virginia-born tastemaker Nancy Lancaster (1897 – 1994) is a widely recognized source of the international design movement known as the British Country House Style. The style’s blending of key forms and materials, which resulted in domestic environments with historicist inflections, recalls Lancaster’s experience of her six-generation family home, Mirador, near Charlottesville. From post-Civil War Virginia to post-World War II England, Mirador to Mayfair examines the inspiration, implementation, and patronage of the Country House Style toward a better understanding of the role of interior decoration in the fashioning of individual and cultural identity.

Dr. Susan J. Rawles has been the Assistant Curator of American Decorative Art at the Virginia Museum of Fine Arts since 2008, serving previously as Research Associate for the American department from 1995. She received a PhD in American studies from the College of William and Mary, an MA in the history of art from Rice University, and a BA in economics and government from Smith College. A specialist in American material culture of the colonial and revolutionary periods, she is particularly interested in the socio-historical context of art and has written and lectured on topics ranging from colonial portraiture to period interiors. Part of the 2010 reinstallation team for VMFA’s American art galleries, she co-authored the accompanying publication, American Art at the Virginia Museum of Fine Arts (2010).