ALLIE LYTH HAS BEEN AN INTERN AT MENOKIN FOR TWO YEARS. DURING HER TENURE SHE HAS ASSISTED THE STAFF IN NUMEROUS PROJECTS AND EVENTS. SHE LIVES IN RICHMOND COUNTY, AND IS A JUNIOR AT CHRISTOPHER NEWPORT UNIVERSITY, PURSUING A DEGREE IN COMMUNICATIONS WITH A MINOR IN HISTORY. 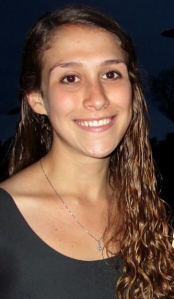 “I began my journey with Menokin in October 2012, when I took a class at Menokin through the Rappahannock Institute of Lifelong Learning at the Community College and then I became an intern in January 2013. When I took that class I had some idea of what I wanted to earn my degree in, but I wasn’t sure. Taking the class here at Menokin helped me realize that without a doubt, I wanted to get into preservation in some way. I have always had a love for historic houses, although growing up in Virginia Beach they are few and far between. Since a young age I would point at every historic house I drove by with my family and say “I want that one” or “I love that one”. When the ladies at Menokin offered me an internship this summer I was beyond excited, and the fact that I would have two other girls here with me, one of which is my sister, made me even more excited to be here again!

Bri’s time at Menokin is quickly coming to a close with only a week and a half left. During her time here we have gotten a lot

accomplished, and a lot of it was fun activities! We’ve walked the trails at Menokin, and gave Bri a little bit of history of the property and she got to see firsthand how many ticks there are here compared to Pennsylvania! Over Memorial Day Weekend, Alice was kind enough to invite us to her annual campout/cookout on the Rappahannock River, which we spent most of Sunday at! Bri also go to go on a kayaking trip down Cat Point Creek with a few people from the National Park Service, which she had a lot of fun doing. A few weekends ago, I took her to Short Pump and went shopping, which was successful! I also took her to a necessary place while visiting the Northern Neck, Los Portales in Tappahannock! A couple of weeks ago, Sarah sent us on an “educational fieldtrip” to Stratford Hall, which we thought was a lot of fun!

Not all of our time here at Menokin has been field trips and beach days though. We have been working on several projects in our time here including developing internships with graduate programs at preservation schools, organizing the remaining woodwork from the house, and helping to develop programs with the local schools in Richmond County that will allow classes to come to Menokin for a field trip and learn important aspects of the history of Menokin as well as programs involving science, math and art.

During our time here at Menokin we’ve learned a lot and had a lot of fun. Come the beginning of July when Bri has left and it is just Emily and me here, it will be pretty quiet, but I look forward to the rest of my summer here at Menokin and having these wonderful ladies here give me projects to reassure my love for history and preservation!”

INTERNPRETATIONS ARE BLOG POSTS AUTHORED BY OUR INTERNS. THIS GLIMPSE OF MENOKIN AND ITS PLACE IN THE LIVES OF THESE COLLEGE STUDENTS IS OUR ATTEMPT TO REPRESENT AN ALTERNATIVE POINT OF VIEW OF A MENOKIN EXPERIENCE. THE ONLY INSTRUCTIONS ARE “WRITE ABOUT YOUR EXPERIENCE HERE.” WE HOPE TO FEATURE AN INTERNPRETATION EACH WEEK.