At this year’s Menokin Music Festival you will have the chance to win this beautifully framed and signed print of an architectural detail of the house. Photographed by Hullihen Williams Moore, author and photographer of Shenandoah, Views Of Our National Park, this print captures, in minute detail, the organic texture of the materials and craftsmanship that are part of Menokin’s mystique. 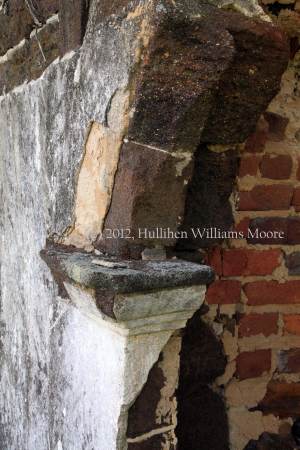 One chance at a win will cost you $10. But feel free to improve your odds! Raffle tickets are available for purchase at the Menokin visitor’s center, and are part of your ticket stub for the Music Festival.

This past Saturday was the 10th annual Menokin Music Festival. This music festival has morphed over the years into a simple afternoon of pick nicking, music and fun, all in the shade of the beautiful walnut trees surrounding the Menokin ruin.

So, where does the bourbon come in? Here was the weather forecast for last Saturday…70% chance of scattered showers and thunderstorms, some severe, with a chance of hail and high winds. Oh, and let’s not forget about the Brood II – the 17-year cicadas that were scheduled to appear by the millions at any moment.

Several skeptical folks called ahead to make sure we hadn’t decided to cancel the whole thing. Nope. No way. Rain or shine. Hail or locusts. If the Egyptians could handle it, so could we.  What the Egyptians didn’t have was bourbon. Buried safe in the ground on the site of the festival exactly one month prior to the day. Wild Turkey to be on the safe side. It’s a Southern thing. Guarantees good weather for your event. Every good Virginia bride knows this old trick.

The day dawned gloomy and blustery, with thick scary clouds laughing at us from the sky. Reports were rolling in of heavy rain to the north and south of Menokin. And to be fair, we did get about 18 drops of rain just about the time the first band cranked up. But by the end of the day? Blue skies, fluffy non-sarcastic clouds and calm, cool breezes. Said one band member,”You have made a buried bourbon bottle believer out of me!”