Last week the Menokin Staff took a field trip into Washington, DC. The primary reason for our trip was to visit the National Building Museum. Our goal was to research their exhibits and come away with ideas for our Visitor’s Center and collection.

If you’ve never been to the National Building Museum, you might drive right past it. Looking suspiciously like a federal administration building, it was, in fact, constructed between 1882 and 1887,  for the purpose of serving as a fireproof headquarters of the U.S. Pension Bureau’s headquarters. In 1997, the historic building was officially renamed the National Building Museum.

However, it is anything but ordinary.

The interior of the building is dominated by a grand central space, the Great Hall. 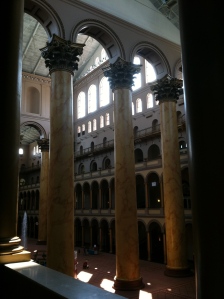 Measuring 116 x 316 feet, the Great Hall features a central fountain and is divided into three courts by two screens of four colossal Corinthian columns—among the tallest classical columns in the world.

As hard as it was to drag ourselves away from the grandeur of the Great Hall, our first stop, the House & Home Exhibit, was well worth it. This “kaleidoscopic array of photographs, objects, models, and films that takes us on a tour of houses both familiar and surprising, through past and present, challenging our ideas about what it means to be at home in America.” We came away from the exhibit with brains churning with ideas of how to use and display our unique collection of construction artifacts here at Menokin.

After a quick lunch in Chinatown (just a few blocks away), we headed up to President Lincoln’s Cottage at the Soldier’s Home three miles north of downtown. Founded in 1851 as a home for retired and disabled veterans of American wars, the Soldiers’ Home stands on 276 acres atop the third highest area in the District of Columbia.

The tour focuses largely on the time that Lincoln spent at the Cottage during his presidency. The story is told by a

tour guide in a friendly, conversational manor, with lots of questions directed at the audience.  The house itself is very stark. Little or no furnishings occupy the large rooms. There is not a great sense of the people that lived there, but the use of recorded actors recounting stories, reading letters and holding conversations in each room does lend insight to the kind of life that the Lincolns had there.

Both places are well worth the visit.