The Menokin Foundation is currently hosting a traveling exhibit from the VMFA (Virginia Museum of Fine Arts) through the end of March.  These insights are designed to give you a better understanding of the artists and their work. The exhibit is FREE, so don’t miss the opportunity to come see for yourself.

On display at Menokin this month is a reproduction from the Virginia Museum of Fine Arts of The Guitarist, 1959. Charles White’s meticulously executed drawings and paintings speak of and affirm the humanity and beauty of African American people and culture. 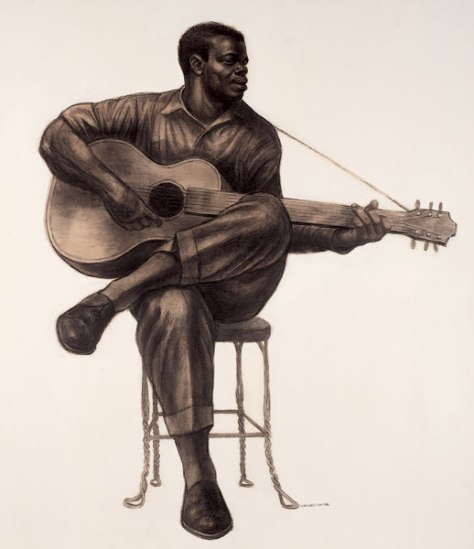 From VMFA transcripts, Charles White said this of his work:

“I believe in the transcendent power of music.  I studied the violin  for about nine years.  My mother insisted on music, even though art was the most important thing for me.  Later, I became interested in dance and I studied modern dance for awhile.  I also illustrated a book, Songs Belafonte Sings.  Harry Belafonte and I have been very close friends for a number of years, and he’s been a great help to me in expressing my ideas in art.

I guess the most important thing is to say something that is meaningful.  I’ve boiled it down to three things I’ve essentially tried to do.  The first is that I try to deal with truth, as truth may be revealed in my personal interpretation.  Truth in a very spiritual sense, underscoring the sense of the inner man.  Second, I try to deal with beauty; the beauty in man and the beauty in life.  I come from the perspective that man is basically good.  I’ve lived in the South, and we’ve had 5 lynchings in my family, and I’ve been beaten up twice, once in New Orleans and once in Virginia.  But in spite of my experiences, and my family’s experiences and tragedies, I still feel that man is essentially good.  I have to start from this premise in all my work because I’m incapable of doing meaningful work that has to do with something I hate.  The third thing I try to deal with is dignity.  I think that once man is robbed of his dignity he is nothing.

I focus primarily on my people and try to give my images universality – meaning an enduring sense of truth and beauty.  I always feel that the artist only does meaningful things when he draws upon that which is closest to him, and he uses that as a springboard to deal with a more broad, all-encompassing subject.  It is only natural to have a special concern to my own people – their history, their culture, their struggle to survive in this, a racist country.  I’m proud of being black.  However, my philosophy doesn’t exclude any nation or race of people.”

Charles White is one of America’s most renowned and recognized African-American & Social Realist artists. He worked primarily in black & white or sepia & white drawings, paintings, and lithographs. His artwork encompassed an incredibly skilled draftsmanship and artistic sensitivity and power that has reached and moved millions. Common subjects of his artwork included scenes depicting African-American history in the United States, socio-economic struggles, human relationships, and portraits.

He is best known for his WPA era murals, especially The Contribution of the Negro to American Democracy, a mural at Hampton University, depicting a number of notable blacks including Denmark Vesey, Nat Turner, Peter Salem, George Washington Carver, Harriet Tubman, Frederick Douglass, and Marian Anderson.

Charles Wilbert White was born on the South Side of Chicago. Due to the poverty of his parents, his parents could not afford a babysitter while they worked, so his mother would leave him at the library. This caused a young Charles to develop an affinity towards art and reading at a young age. White received a full scholarship to be a full-time student at the Art Institute of Chicago. White also began working as a Works Progress Administration artist, and was later jailed for forming a union with fellow black artists who were being treated unfairly and wanted equal rights.

White and his wife Frances Barrett moved to California in 1956, which was the beginning of White’s career as a Los Angeles artist. He had several shows in Los Angeles, and was represented by the Heritage Gallery.

Charles White was on faculty at Otis Art Institute (now Otis College of Art and Design) from 1965 to 1979 where he taught many African American students who came to study with him including Alonzo Davis, David Hammons, and Kerry James Marshall.

One thought on “Insight on the Artists: Charles Wilbert White”

Follow us on Instagram
Happy #MuseumSelfieDay! Here are some of our best selfies from Menokin and nearby Virginia museums. Don’t forget to tag us when you share your Menokin selfie! 🤳🏽
Happy New Year! 🌟 We are OPEN on this beautiful winter day.
Menokin’s holiday break begins tomorrow. We will reopen on Thursday, January 2, 2020. The Visitors Center will be closed December 21 to January 1. The property, including all trails and roads, will be closed December 25 to January 1. If you have any questions, email menokin@menokin.org or comment below!❄️⛄️ #virginia #virginiahistory #snow
Clarissa is so excited she’d call her mom if she had a phone at her desk. #OperationElbowRoom
#operationelbowroom
We have six staff members but only five phones 😱 If we meet our #GivingTuesday goal, no one will have to draw the short straw for using the office with a phone 📞 Link in bio!
%d bloggers like this: