Not since the Lees of Menokin was published in 2009 has there been such a romantic story here as occurred last week.

It all began with the arrival of these two, Patty and David Cassidy, from Maryland. They were visiting on a whim and decided to take a hard hat tour, but asked if they could delay it a bit, because David was waiting for an important business call.

Patty and I chatted about really important things like shoes (we’re both obsessed), vintage toys (we’re the same age. remember goop?!?) and husbands who work even when they’re supposed to be taking a day off.

While the minutes ticked by and David faithfully checked his phone for “the call”, we moseyed around the Visitor’s Center and began discussing Menokin’s programs and vision.

About 30 minutes later another car arrived in the parking lot and a couple came into the Visitor’s Center. After squeals of surprise from Patty and hugs all around, we learned that the “business call” was actually the notification of their surprise arrival of Patty’s best friend, Eileen Usher and her hustband, Brian, secretly arranged by David to celebrate Patty’s birthday. ❤

The four of them went off with Juliana for their Hard Hat Tour, though David took me aside and warned that others might show up. While they were gone, another couple arrived and were sent to join the tour. 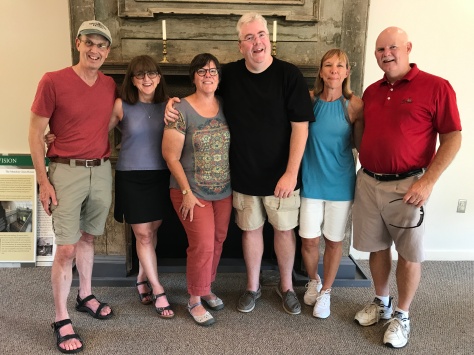 This stealth reunion and beautiful gesture really touched all of us. And we were especially happy that they chose Menokin for their celebration venue.

Head’s up gents. Make some points on your wife’s next birthday! We’ve obviously have what it takes to make the party memorable!