Here are three things I learned this past Saturday:

1. The Latin word for holly is ilex.
2. There are whole societies of people who are organized around their love and knowledge of genus ilex.
3. These Holly Society people are fun!

I learned all of these things because the Colonial Virginia Chapter of the Holly Society of America held their meeting at Menokin on Saturday.

The Holly Society of America, Inc. is an active, non-profit organization with members throughout the United States and numerous foreign countries. The purpose of the Society is to stimulate interest, promote research, and collect and disseminate information about the genus Ilex. The society provides the medium for all people interested in hollies, including both novices and skilled growers, to communicate and exchange information through scientific studies, publications, lectures, meetings, visiting holly collections, and other educational endeavors.

I have to admit that I had no idea what to expect, but definitely not who showed up. The front line of organizers swarmed in and within minutes transformed the Menokin Visitor’s Center into Holly Central. There was a table for holly clippings, a table for FOOD (lots and lots of food), a table for books about holly, and a table for fern (yes, fern – go figure) samples for the day’s lecture.

Fern samples for the lecture.

The cutting exchange offers selections of unusual species and varieties of Ilex from around the world and not readily available elsewhere. All plants for the auction and cutting exchange are donated by Society members.

Plotting their strategy for bidding on the Camelia.
There was also a patio full of beautiful potted plants for the auction that concluded the activities. The proceeds from the auction are earmarked to send a well-deserving 5th grader from Gloucester to Nature Camp. As a former Nature Camper myself, I threw in a winning bid for a pair (male and female) of
Ilex verticillata “Chrysocarpa” (yellow-fruited winterberry) bushes. 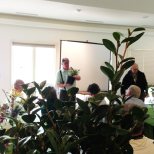 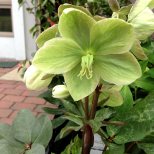 Camelia.
The members of the Colonial Virginia Chapter came from all over – many from Tidewater, some from the Northern Neck, a few from Maryland, and two visitors from Ohio. All were new to Menokin and enjoyed hearing about our programs and plans.

By the end of the meeting I felt as if I was bidding farewell to old friends.